Islam – Not as bad you think it is

We live through troubled times. I suppose most people in all periods of history could have said that if we’re honest about it. The media have spent the last decade painting a picture of the Islamic world for us. More accurately, they’ve dug out the old images of Edwardian-era “Mohammedans” and updated them instead. It’s just that they’ve viewed all these images through the prism of 9/11, 7/7 and al-Qaeda. None of which leads to an accurate depiction of Islamic people, practice, or culture. In the seventies and eighties, the media distorted our view of the people of Russia as the red menace that was going to destroy us all. In the nineties and noughties it was the muslim terrorist that was going to destroy christendom and impose his or her beliefs throughout the secular west.
As a white anglo-saxon, I don’t really feel qualified to talk about the politics of Islam, and the distorted idea of Islamic culture that we have (in large part,  thanks to the Daily Mail, Express, and their ilk).  As a history graduate, I do feel adequately qualified to write about the other impacts of Islam today. 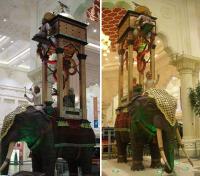 For example Abu al-Jazari (1136-1206) is one of the greatest engineers in history. You probably won’t have heard of him, but you probably should have. It was him who invented the camshaft which is needed to drive pistons, which is needed in engines of all kinds. Without this man, there’d be no modern transport as we know it. He is also famous (at least he should be) for inventing some of the earliest automated accurate clocks, the world’s first hydropowered water irrigation and delivery system, and the some of the earliest robots. And all while the west was still scampering around the fields trying to improve the plough.
Even earlier, was Abbas al-Zahrawi born in the north western corner of the Islamic world – Spain. He is known (or should be) as the father of surgery. He invented around 200 new surgical instruments including the scalpel, retractor, curette, specula and forceps still used in hospitals around the world. He performed some of the earliest surgeries, including the forceps delivery of babies and removal of cataracts a thousand years ago. By the way, the earliest known hospital is from 872 in Cairo, at a time when the English were still running away from Vikings, and there wasn’t a country called England.

Piri Re’is, a Muslim explorer and sea captain, created a map on his travels in 1513. This astonishing map clearly shows Antarctica, as well as the Andes Mountains of South America, both of which were not ‘discovered’ for many years after that.
And it wasn’t all men, either. The oldest university still in existence is in Tunisia and was created 400 years before Oxford and 200 years before the Norman Conquest,  by Fatima al-Fihri. Maeriam al-Astrulabi was the most famous maker of Astrolabes, astronomical instruments used in navigation, geography, astronomy and timekeeping throughout the mediaeval world.
It’s easy to think (especially if you do read the Daily Mail, et al) that Islam is all about death, destruction, war and terror. Islam has a rich beautiful culture and history and contributed a huge amount to the growth and development of civilization and we shouldn’t forget it.
54.988000 -1.619000